Go the Extra Mile to Cut the Carbon

Christian Aid's 1,000 mile ‘Cut the Carbon’ march is finally on its last leg (but not legs) and will be rounding off in London on Tuesday 2nd October. 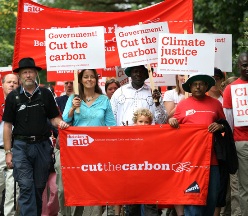 The march, which began in Northern Ireland on 14th July, has already enjoyed rallies in Edinburgh, Leeds, Birmingham and Cardiff and is currently making its way east along the south coast before heading up to London.

Supporters are being encouraged to gather in the riverside area next to City Hall at More London Place, near Tower Bridge (nearest tube: London Bridge), before joining the final mile of the march at 11am on Tuesday 2nd October.

At around 11:45am campaigners will make there way through Tooley Street, where the final leg of the march will officially start at 12:00pm.

The march will then snake its way across the Thames, past the London Stock Exchange, before rounding off at St Paul’s Cathedral at around 12:45pm.

The rally outside St Paul's starts at 1pm with speeches from the international marchers and music provided by the London Samba band.

A celebratory service will be held at the cathedral from 2pm until 3pm to mark the achievement of the marchers and everyone down the country who has made the two and a half month walk possible.

Tickets for the St Paul’s service are free but are being issued on a first come first served basis. To book yours please call 020 7523 2258.

We at I Count will be there, so please come and say hello.