It would appear that pressure is piling up on US President George Bush to act on global warming following news that his top scientific advisor is 90% sure climate change is a manmade phenomenon. 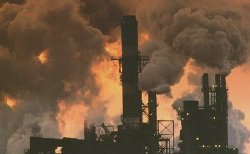 Professor John Marburger, speaking today to BBC News, said that the planet would at some point become "unliveable" owing to rapidly increasing temperatures.

Professor Marburger went on to add that climate change was unequivocal, with mankind more than 90% likely to blame.

"I think there is widespread agreement on certain basics," said the scientist, "and one of the most important is that we are producing far more CO2 from fossil fuels than we ought to be."

However, the professor was less definite when predicting a safe limit for temperature rises. "I think 2C is rather arbitrary and it's not clear to me that the answer shouldn't be 3C or more or less. It's a hunch, a guess."

Professor Marburger's comments precede talks set to take place at the White House later this month, where leaders of major developed and developing nations will discuss the future global direction on climate change.